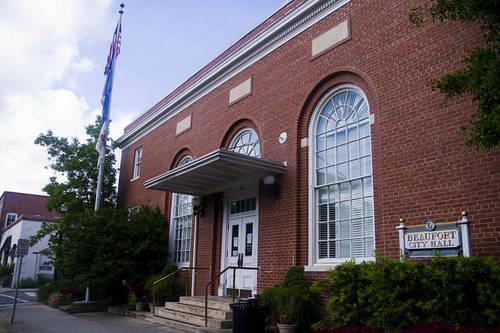 TheDigitel
The Carteret Street building is now empty of city officials and a vault of dreams.

Update February 13: By accounts it sounds like the first weekend for downtown's new market went swimingly.

The Island Packet has chimed in with a nice profile of the renovation effort that proved to be more "interesting" than expected (read that here), and the market has posted a slew of photos of the space and their offerings (see those here).

Update February 9: Although the opening slipped from October, the new Lowcountry Produce Market﻿ in the heart of downtown opened its doors yesterday.

They're open seven days a week from 8 a.m. to 8 p.m. at the old City Hall on the corner of Port Republic and Carteret streets. They also serve up breakfast Wednesday through Sunday﻿ from 8 to 10:30 a.m.

If you've been in, let us know what you think of the new spot and the rave cheese case.

First reporting: As you may recall the Beaufort City Council and redevelopment commission have been looking for a new use for the shuttered city hall on Carteret Street.

Well, according to The Island Packet that use may have been found. The Packet is reporting that Lowcountry Produce is looking to open a market in the building.

This is good news for anyone who is a fan of Lowcountry produce. And who isn't?

Check out the Packet's story here.

A Lobeco-based specialty food company that’s been spotlighted by no less than Oprah Winfrey and The New York Times will open a storefront in downtown Beaufort’s former City Hall, the Beaufort Redevelopment Commission and Mayor Billy Keyserling announced today.

The 1917 structure, beside the county library in the heart of Beaufort’s historic downtown, served as Beaufort City Hall until last summer when staff moved to the new facility at the intersection of Ribaut Road and Boundary Street.

The Beaufort Redevelopment Commission tackled the task of finding a suitable tenant to fill the imposing and important structure at Carteret and Port Republic streets. In March, a call for proposals brought only one informal response –but efforts behind the scenes continued with the City’s newly created Office of Civic Investment.

“Lowcountry Produce is an ideal company to move into the old City Hall. This kind of reinvestment in the heart of downtown, especially with such a historic and important building, is key to keeping Beaufort a vibrant and thriving place to do business,” Verity said.

Originally built as a post office, the structure has undergone multiple renovations in the past 90 years. Under the lease agreement, Lowcountry Produce will make additional changes to convert the corner building into a retail food market.

Lowcountry Produce, led by Noel Garrett, his brother Dwight Garrett and Seabury Thorp, is a purveyor of specialty food products distributed to over 1,500 stores across the country. The Garrett’s parents, Martha and Dwight Garrett, founded the company and still serve as its main cheerleaders, the Garrett brothers said.

All products are handmade and hand-packed using only all-natural ingredients. The products are made locally at the farmstand in Lobeco. The farmstand is the original “company store” where customers can find local fruits and vegetables as well as a great hamburger at the grill. That facility will remain open when the downtown location opens its doors early this fall.

In six years, Lowcountry Produce has been mentioned by 0 Magazine for inclusion in Oprah Winfrey’s Christmas 2010 "0-List," and has been featured in an article in The New York Times. Country Living Magazine named them one of the "Best American Pickle Brands" in July 2010. Their products have been talked about on “Good Morning America” and the “Today” show, and last month the company earned the Civitas Award for Excellence in Free Enterprise from the Beaufort Regional Chamber of Commerce.

In May, the Redevelopment Commission and City leaders celebrated groundbreaking for MidTown Square, a residential project on one and a half blocks of largely vacant land at Bladen Street in Beaufort’s Northwest Quadrant. When completed, MidTown Square is expected to feature up to 16 homes and six “live-work units” developed by Steven Tully and John Trask III.

“As we saw with MidTown Square, people are responding to the investment made by the City to improve Beaufort,” Beaufort Mayor Billy Keyserling said. “It’s going to take some time, and it’s going to take more public-private partnerships to make it happen. Filling the former City Hall building with an exciting company like Lowcountry Produce is another big step.”

The opening of the Carteret Street Lowcountry Produce store came as a result of their interest in a more urban storefront, Noel Garrett said. Downtown residents John and Erica Dickerson were instrumental in bringing the company to Beaufort, he said.

The City’s Office of Civic Investment and the Redevelopment Commission “met with the owners of Lowcountry Produce to assess their needs and determine the best location in Beaufort for their store,” said Demetri Baches, co-leader of Office of Civic Investment and owner of the planning firm Metrocology. Interest in the City Hall building grew as plans for downtown Beaufort began to crystallize.

The company, Redevelopment Commission and City leaders negotiated a lease for a combined 10-year period in increments of an initial three-year term with renewals available for three and four years. The company will be responsible for making all improvements to the structure.