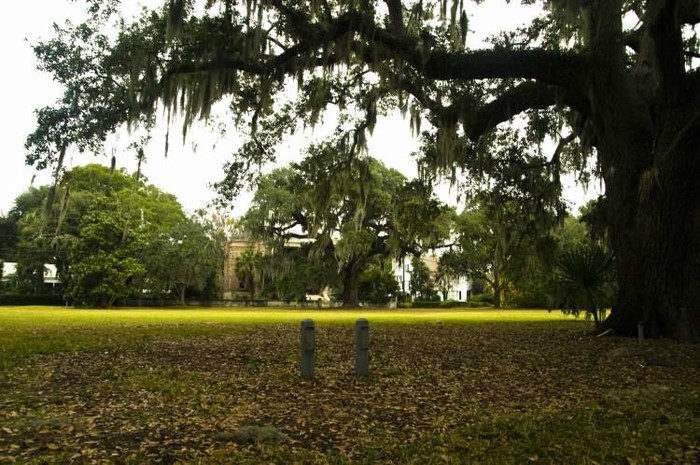 2:20 am on Sunday December 5, 2010 | Posted by Ken Hawkins
Downtown Beaufort's iconic 'The Green' secured for the public in perpetuity (updated)

Ken Hawkins/TheDigitel
A sign that once read "private property" on the south of The Green is now noticeably absent with only its two supports left.

Updated Dec. 7: Lowcountry Weekly's Facebook page has some photos from the dedication of "The Green."

You can check out the album here.

Reported Dec. 5: The last undeveloped city block in historic Downtown Beaufort, "The Green," has been successfully persevered under a pair of acquisitions by the Beaufort County Open Land Trust, Beaufort County’s Rural and Critical Land Protection Program, and the City of Beaufort.

The block of land bordered by the Old Point streets of Laurens, King, Pinckney, and Short was actually owned by two separate owners and the Land Trust secured a land donation for the eastern half and purchased the western half from the Gray family.

As for what the future of the park now holds, Open Land Trust Director of Development, Katherine Royal, said "The Green shall be used as a passive park open to the public for unstructured activities including picnics, bird watching, reading and the general enjoyment of the natural environment in perpetuity."

But she offered that the exception of regularly scheduled events won't be permitted, such as organized sports.

However events like weddings, festivals, family gatherings may be occasionally allowed as the county and Land Trust deem fit with fees and other revenue providing for its maintenance.

The Green is popular with not only residents but carriage and walking tours that often stop there to tell stories about the area and the space where soldiers camped during the Civil War. The Green has also seen movie highlights including in the iconic film "The Big Chill."

The Green on the map

It is our responsibility to protect our environment and its greenery. The government and the community centers should make plans in conducting awareness programs and events that are very essential for the people to know about its importance and make an eco-friendly environment. bulleit bourbon