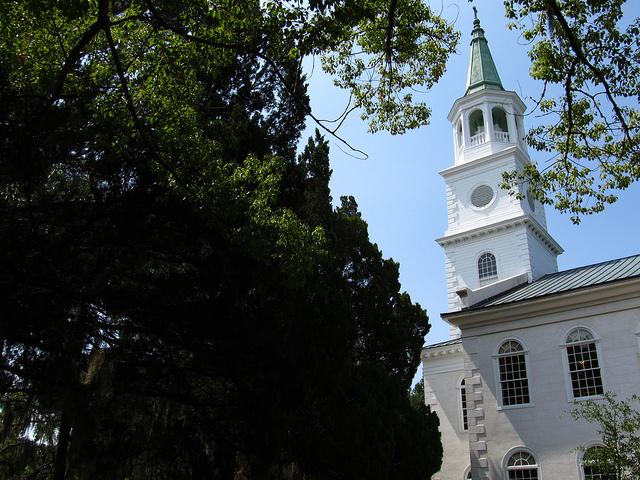 12:55 am on Thursday January 24, 2013 | Posted by Ken Hawkins
Separating group of Episcopal churches secures temporary restraining order on use of group's name

A group of Episcopal churches in the coastal region of South Carolina has secured a temporary restraining order allowing only a few members of the separating body to use the name the "Diocese of South Carolina".

A release from the seperating churches:

The judge’s order states, in part: “No individual, organization, association or entity, whether incorporated or not, may use, assume, or adopt in any way, directly or indirectly, the registered names and the seal or mark of The Protestant Episcopal Church in the Diocese of South Carolina.”

The order specifically prohibits all but a handful of Diocesan employees, directors and trustees who are specified by name from using the Diocese’s identity.

TEC and several local parishes that remain associated with it have begun to assume the Diocese’s identity and use its seals, name and trademarks on websites, ads in newspapers, and other documents sent to parish corporations and individuals, and in registration forms mailed to the parishes within the Diocese stating its intent to take actions at its upcoming meeting on January 26.

The order states “The use of the names and marks of the Diocese of South Carolina can affect its goodwill, its third party relationships and create confusion among those with whom it deals in the ordinary course of its business. In short, the ongoing business of the Diocese of South Carolina could be irreparably injured if corporate changes occur in its name, implemented by those without actual corporate authority.”

Judge Goodstein’s order, which takes effect immediately, prohibits such misappropriation of the Diocese’s identity for 10 days.  A hearing has been scheduled for February 1 to determine whether the temporary restraining order should be replaced by an injunction that could extend the prohibition until the court rules on a lawsuit filed recently by the Diocese of South Carolina, its trustees and 31 congregations, seeking to protect the Diocese’s real, personal and intellectual property and that of its parishes from a TEC takeover.

The judge’s decision comes days before TEC has scheduled to convene a “special convention” meeting, purportedly to choose new leadership for the Diocese of South Carolina. The stated goal of the meeting is to elect a provisional bishop and clergy and lay people to serve in diocesan positions to fill vacant offices of an organization whose ownership is contested.

TEC has historically filed lawsuits against parishes and dioceses that have disassociated over theological differences with the church, and has evicted congregations from their churches. In all, TEC has filed more than 80 lawsuits, spending more than $22 million in legal fees.