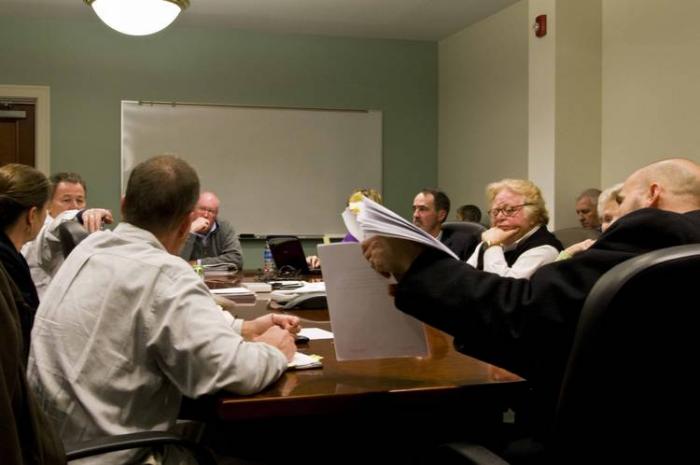 TheDigitel
Discussion over how best the Bladen Street code should be worded.

Update January 5: The Island Packet has their own report on lasts night meeting and it takes a slightly different spin.

The story, and particularly the headline, make it sound like the council is ready to yank the parking kiosks at then next council meeting. While I won't be surprised if that's the direction council eventually heads, it would surprise me if it happens next week.

What seems more likely given my read is — pending the outcome of the parking workshop at a forthcoming date this week — is that a tiered parking rate be implemented now while the Bay Street kiosks be given further assessment.

At any rate, my report from the meeting is below and the Packet's report is over here.

First reporting January 4 evening: At the Beaufort City Council workshop meeting on Tuesday, January 4, there were familiar topics: form based codes and parking.

At the start of the meeting  there were 21 in attendance including media and city staff, but not including council. In the relatively small conference room it made for a partly standing crowd.

The biggest topic was, once again, parking.

Mayor Billy Keyserling opened with a statement aimed at clearing the air.

"In the last six weeks I've heard a whole lot of misinformation from people that don't like kiosks or people whose businesses are failing," Keyserling said. "This is about making sure people that come downtown have a place to park. But to hear that this is someone's special project to take money from parking to put into the Northwest Quadrant just isn't true."

He then pointed to a box of sweets as a proverbial olive branch.

It was a bit of lightheartedness that would occasionally pop up as the frustrated merchants in attendance continued to pull on council to enact their disparate ideas that often included ditching the kiosks, if not outright moving to a citywide free parking system with a time limit, as voiced by Roger Alley of Blackstone's Cafe.

Still, despite Keyserling's hope that council had decided free parking wasn't on the table Councilman Gary Fordham rather quickly spoke up to dispel that hope, "Sunday when I went to church some of us talked about the parking problem. And so I had my wife take me to the various kiosks, and it was the most confusing thing. I think we made a mistake, I know I made a mistake. I would suggest that we put the red bags back on and give [free parking] another month."

After much discussion and rehashing, Keyserling presented the idea of taking the surface lot at Port Republic and West streets that's currently leased to Lanier Parking and making it a free lot for both employees and frustrated customers.

It was an idea that some merchants perked up to — but not all of council.

Councilman Mike Sutton said, "My concern over your suggestion is that it is a privately held lot and it's had years of issues, and I do not want to test something the city doesn't own."

Others faulted the idea for not fixing the issue of the lengthy lines at the parking kiosks. Still others proposed using coded free parking vouchers or possibly tokens to reward and incentivize loyal shoppers to return.

In short, there were once again many ideas and no single direction, so council agreed to hold one more parking workshop at a date to be determined but before the next council meeting on January 11.

Under the present pace it looks most likely that a tiered set of parking rates will be put in place to drive longer term parkers off Bay Street and into the back grid of streets or the marina parking lot. But that would most likely be a precursor for another round of edits.

Council also discussed how to deal with the appeal process of the Bladen Street form based code proposal.

There were questions about how appeals should be made and how should they be routed, and if technical matters should go to the board of zoning appeals while more semantic issues go to the historic review board, and if so how would the lines be drawn. In the end the consensus was that as much as possible should be worked out at staff level and after that appeals go to the design review board.

Council also instructed staff to add a second pictorial illustration on house size and density to reflect a more generalized range of options. It was also asked that a sentence on the slope of roofs be removed.

On the matter of Reynolds Street repaving for the TCL campus the repaving work is already funded with stimulus funds but the college expressed interest in partnering to expand a fix of pavement and auto-pedestrian safety into a general beautification of the area.

City Manager Scott Dadson said the city sees an opportunity by the city getting financially involved to push improvements that fit the city's vision.

But Sutton expressed concern over the group not looking harder to bury power lines, and Keyserling expanded to say he sees an opportunity to improve connectivity in the city.

"There is an opportunity to add bicycle and pedestrian connectivity and possibly one day automobile interconnectivity through the campus," Keyserling said. "I just don't want to miss an opportunity and to do something that becomes a monument preventing doing something else nice for the city."

With that TCL and city staff went back to further investigate such opportunities.