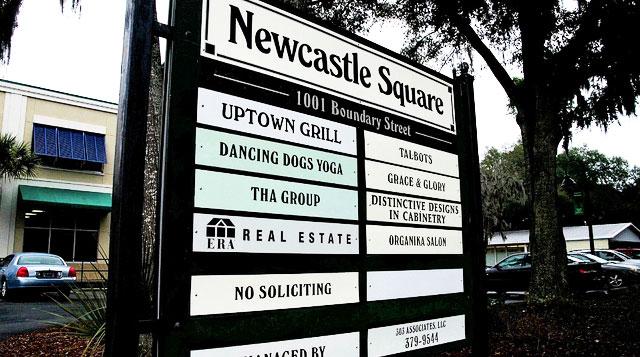 7:52 am on Monday December 5, 2011 | Posted by Allegra Craig
The Herban Marketplace: Green with an accent on holistic (Update: Photos)

TheDigitel
Newcastle Square in Uptown is about to get a new market.

Update December 5: Haven't been able to make it over to the new shop, yet?

Here are some photos that were provided to us.

Update December 2: It took a bit longer than expected, but the Herban Marketplace has soft-opened today.

They announced it by writing on their Facebook page: "Wouldn't you love to be able to stop in today and pick up some organic ingredients for your holiday cooking? Well you CAN! We wanted our Facebook friends to be the first to know that we will open our doors at 10am today! The store looks fabulous and we will continue to add new features and products as the weeks progress."

But don't worry the yoga spot isn't closing up, in fact yoga spot owner Shelley Lowther ﻿is expanding the yoga studio expanding into larger space upstairs and is also the force behind the new market.

As Lowther began brainstorming a business she could put into the 1,200-square-foot first floor spot the idea for a green market struck her on a drive to Fresh Market on Hilton Head Island one morning. In essence, the proposition is: Beaufort needs a market that promotes healthful eating.

So Lowther paired up with her mother-in-law Greta Lynne, a former nurse, to make the idea into a business.

Lowther and Lynne want the Market to be “all about the experience, living well and eating well,” the pair said. "Everybody wants to eat well, feel well, sleep well,” Lynne continues.

While the holistic approach is quickly gaining popularity, the owners say some trepidation still exists on the part of consumers and so they hope to take the "unknown" out of it and simplify what can seem to be overwhelming processes by offering regular cooking demonstrations by local chefs, as well as occasional workshops and seminars.

Planned for the market is to carry as much local food as possible, including fresh free-range eggs, all natural produce, organic poultry, and local honey. All the products they carry will be natural, sustainable, and green.

Because they desire to promote a sense of community, Lowther and Lynne aim to stock their shelves largely based on their potential customers’ wish lists. So they have taken to Facebook to request Beaufortonians’ input. It doesn’t end there, though. Their desire is for the shop to be inviting. “We want to make it an experience that when you leave, you’re ready to come back,” Lowther describes.

“We want to be complementary not competitive,” they add. So while they will carry a small selection of supplements, their focus will be on fresh food items. They also plan to carry a small selection of prepared foods by some local restaurants, but will strive to do so without drawing business away from these businesses. It’s important to create a “sense of business community,” they explain.

Look for Herban Marketplace to open no later than July in Uptown at 1211 Newcastle Street Unit C﻿. The shop will be open seven days a week from 10 a.m. to 6 p.m. Visit their website or Facebook Page for more information.