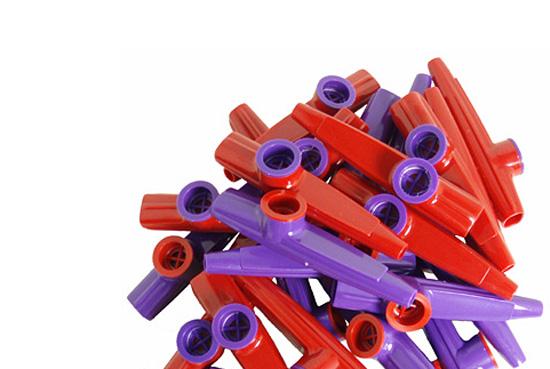 Updated May 26: Kazoobie Kazoos was in Washington, D.C., this week to receive their small business award from the U.S. Chamber of Commerce.

Bluffton Today recently caught up with the company to see what makes kazoo people tick, or I guess hum. You can check that out here.

Updated March 14: Sadly, Kazoobie Kazoos was not selected as one of the seven finalists for the U.S. Chamber of Commerce's DREAM BIG Small Business of the Year Award.

Still, just making the initial cut of 75 Blue Ribbom Small Businesses was a huge accomplishment for the Beaufort-based biz. And we tip out hats to Kazoobie and its staff.

For a list of the seven finalists selected check out the U.S. Chamber site here.

Updated March 4: The Island Packet caught up with the folks at Kazoobie Kazoos to talk to them about their recognition from the U.S. Chamber of Commerce.

Check out the report here.

Updated March 2: We were remiss in not including in yesterday's report  that you can vote for which business should win the chamber's Community Excellence Award.

In addition to awarding the Business of the Year recognition, the U.S. Chamber is allowing the public to vote for which of the 75 finalists should receive the Community award.

To vote follow this link here and then find Kazoobie (or whomever you want to vote for) in the drop down tab.

Reported March 1: Beaufort-based Kazoobie Kazoos has been named one of the U.S. Chamber of Commerce's 2011 Blue Ribbon Small Businesses of the Year, according to the chamber's website.

Kazoobie has a more than 10-year history that has seen it grow from an strictly online business to opening a facility on Hilton Head Island, then moving to Florida and then ultimately moving to Beaufort in 2009 where it now manufactures plastic kazoos among other items, according to its website.

Here's a bit of an overview about Kazoobie from its site:

In 1997 Rick Hubbard began offering kazoos through the web, primarily at the request of fans of his shows. Orders began rolling in. Since then Kazoobie Kazoos has sold over a million kazoos to kazoo players all over the world.  Kazoos have been sent to Japan, Hong Kong, Singapore, Great Britain,  Scotland, Australia, New Zealand, Sweden, Belgium, Switzerland, Italy,  Canada, and most of the United States including Hawaii and Alaska.

Seven of the 75 businesses chosen as top small businesses will be selected as finalists for the chamber's Dream Big Small Business of the Year award. That selection will occur on March 14.

Other businesses of regional interest that were selected as top small businesses are Advantage Media Group of Charleston; Charleston Cookie Company; TailsSpin of Savannah; and Wild Creations of Myrtle Beach.