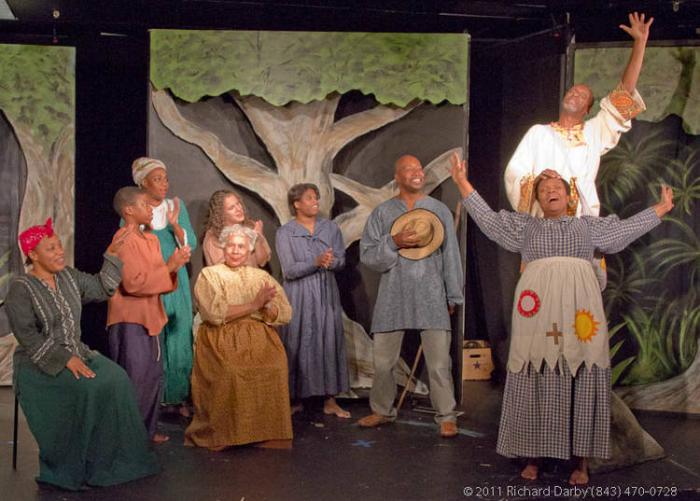 11:40 am on Sunday November 6, 2011 | Posted by ArtSeenSC
Natalie Daise stars in Quilting the Sun at ARTworks

A scene from Quilting the Sun @ ARTworks
photo of the cast by Richard Darby.

Directed by JW Rone and produced by the Palmetto Theater Xperiment, Quilting the Sun is a play that opens November 10th and runs through the 20th.

It has been Rone's dream since 2003 to produce this play by his close friend poet and playwright Grace Cavalieri, who has had 22 plays produced throughout the country, including three productions in New York City at the Quaigh, WPA & Common Basis Theaters. Cavalieri also produced twenty years of The Poet and the Poem on public radio, and currently transmits the series from the Library of Congress via NPR satellite. She has received the Pen-Fiction Award, the Allen Ginsberg Poetry Award, The Corporation for Public Broadcasting Silver Medal, and awards from the National Commission on Working Women, the WV Commission on Women, the American Association of University Women, and the inaugural Columbia Merit Award for "significant contributions to poetry." She writes full-time in Annapolis, Maryland where she lives with her husband, sculptor Kenneth Flynn.

Cavalieri will attend the performance in Beaufort. J.W. Rone's theater company is the Palmetto Theater Xperiment, and he is the Executive Director of ARTworks in Beaufort Town Center.

What do you look forward to in this production of Quilting the Sun?

I'm interested to see if the slave narrative materials I used as the basis  for the Narrator (JUJU Man) are received well by the audience. I also hope to know if the script is comprehensible as it's somewhat pointillistic, not linear, and calls for the audience to cross some invisible bridges of thought. Poets who write for theater are often incorrigible.

What aspect of Harriet Powers, the art-quilter and freed slave who lived in Georgia in the 1800s, interests you most?

The Harriet I invented is the only one I know. And she embodies compassion and strength. I also think she has wry humor. Also I'm very interested in women who have genius and are blocked by the world.

J.W. is a personal hero to me. I knew of his work in Baltimore at the now famed Theater Project. He was part of a group of young theater visionaries in the 1970s on. Then I moved to West Virginia in 1988 so my sculptor husband could have more land for a studio, and J.W. was Artistic Director for the theater activities in Berkeley Springs, near where I lived. When the iconic "Ice House" theater was completed, he premiered a staged reading of my play, "Pinecrest Rest Haven." The reading allowed me to rewrite before it went to an off-off broadway production. I've followed J.W. from a distance since then and do not want him very far out of my sight. He's a force of nature and we don't see courage like his very often.

ARTworks is at 2127 Boundary Street.