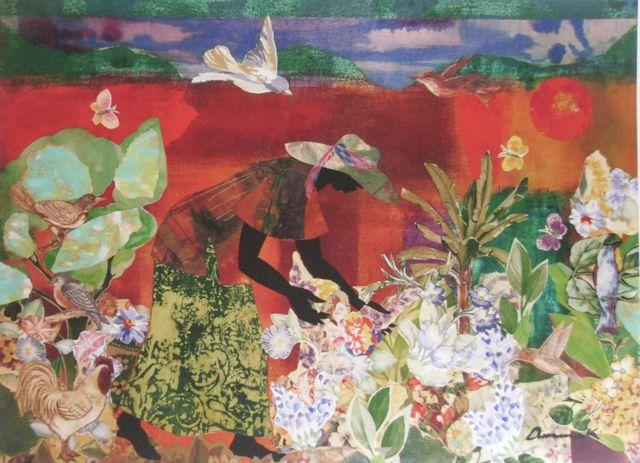 Artist and collagist James Denmark is coming to the ARTworks gallery with an opening reception from 6 to 8 p.m. on Friday, January 7, and a show running through the closing reception on Friday, February 5.

In his studio in Yemassee SC, using brightly hand colored papers and found materials, Denmark creates compositions that go beyond the superficial and transitory. He focuses, instead, on what is eternal and universal. Denmark's work is consistently and eagerly sought after by galleries and collectors worldwide, most notably New York's Metropolitan Museum of Art.

"Trust and faith creates confidence, which allows me to move forward with my work," stated Denmark. "I leave everything to the spirits. I step back every so often to peek at found collage materials, and to ponder new possibilities. I am a party to improvisation, found materials, and the impact of color."

Born in 1935, Denmark was exposed to color and form at an early age by his grandmother, a wire sculptor and quilt artist, by his grandfather, a bricklayer noted for his unique custom design molds, and his mother who was gifted with an intuitive feeling for design and a fastidiousness for detail which she expressed in all aspects of her daily life. While attending Florida Agricultural and Mechanical University in Tallahassee, Florida on a sports scholarship, he came under the tutelage of the artist and acclaimed African-American art historian, Dr. Samella Lewis, who exposed him to great traditions and accomplishments of the African -American art movement.

Denmark moved to Brooklyn, New York and began a career as an art teacher in the public school system, and from 1973 to 1976, earned his Master of Fine Art Degree at the prestigious Pratt Institute of Fine Art. Denmark met and was nurtured by an immensely talented community of artists, including abstract expressionists as Jackson Pollack, Clifford Still, and William DeKooning. The African-American masters Norman Lewis, Romare Bearden, Jacob Lawrence, and Ernest Crichlow instilled in him an appreciation of his African-American artistic heritage, and he began experimenting with collage. Prior to this period, he worked primarily in watercolors and charcoal.

Denmark has a natural affinity for the difficult and largely improvisational medium of collage and quickly developed his own unique and easily identifiable style, which can be enjoyed by the public at ARTworks Tuesday through Fridays, 11 a.m. to 6 p.m., and Saturday afternoons.