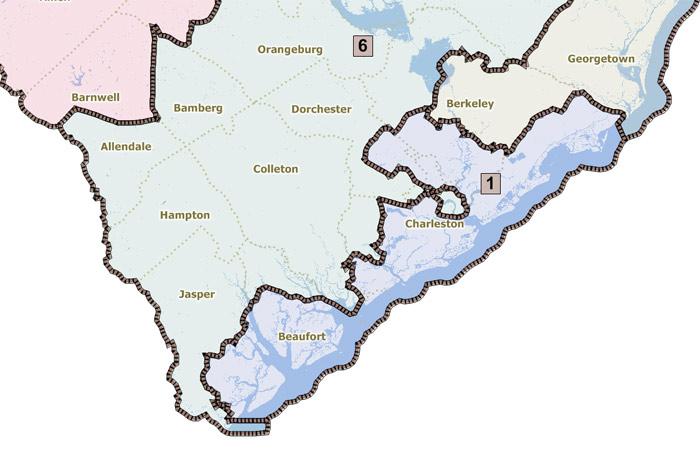 Update June 30: In a cunning maneuver, a group of Republicans and Democrats in the S.C. Senate managed to vote through a plan that would have the new 7th Congressional District made up of a hodgepodge of I-95 counties and anchored by Beaufort County.

(That's the plans shown in the second map from the June 21 update just below.)

But the war is far from done and the Senate and House must yet compromise. What's that mean? Expect something more similar to the House's original plan of a coastal district made of mostly Beaufort and Charleston counties.

We'll be sure to keep posted as this one heads back for debate in late July.

Update June 24: The debate has waged for a few more days and the Senate is still in a gridlock over how the new seventh congressional district should be formed.

(If you're not sure what the problem is, check out the June 21 update just below.)

And the Legislature is feeling the clock as next week will be its last chance to draw a plan before the U.S. Justice Department﻿ decides for the state.

I'll point you over to The State for the rundown on the latest in this woe.

Update June 21: While the plan for the S.C. House for the state's new seventh congressional district﻿ (pictured at the top) has seen large acceptance, the S.C. Senate's plans are ruffling more feathers.

You can see the two proposed plans to the right (click them for more detail) but, in a nutshell, while the House plan groups large geographic areas the Senate's two proposal carve more intricate﻿ jigsaw like chunks of the state — and those pieces often split historically cohesive areas, like Myrtle Beach and North Myrtle Beach.

And that's not going over well and it sounds as  though the Senate will rework their ideas, and to guess, I'ld say to likely to better match watch the House has proposed.

For a rundown on the latest I'll point you to The State's report.

It's been three weeks since we last heard about the plan and The Island Packet has followed up with discussion about the plan and it sounds that the new "coastal district" (pictured above) has a pretty good chance of becoming reality.

We're not just there yet, but we're getting close to the "speak now or forever hold your peace" moment.

Update May 22, a follow up to our last update: All seems in line with expectations.

The draft new district places much of Beaufort County into the new Charleston-Edisto-Beaufort-Hilton Head "Costal District" (see the map above.)

The splitting off of the upper Northern Beaufort County area above Whale Branch and exclusion of all of Colleton but Edisto has race-balencing implications (with the possibility being that Black population would continue to move into Jim Clyburn's already black-majority district), as well as just generally displeases some that Beaufort County won't be unified.

The Island Packet has a solid report with some good discussion; read it here.

If you'd like to explore just where the lines fall, snag the KMZ file that can be viewed in Google Earth. You can also get detailed demographic data at the heading "Congressional Plans﻿" over here.

Updated May 19: Rep. Tim Scott's 'campaign' stop of sorts in Beaufort County this week appeared to be the precursor for what we all expected; Beaufort County no longer will fall within Rep. Joe Wilson's 2nd Congressional District.

And with the latest proposed redistricting plan released by the S.C. House on Wednesday it indeed appears that will be the case.

Looks like Scott will move from his 1st District and into the new 7th Congressional District anchored by Horry County, and Beaufort County will move from the 2nd to 7th. We'll send you to The State for some nice coverage of the latest proposal.

Update March 28: The Census numbers are in and the war is tipping off tonight at a public Senate Redistricting hearing in Beaufort.

The meeting is today, March 28, at the Technical College of the Lowcountry at 6:30 p.m. to discuss redistricting in Beaufort, Colleton, Hampton, and Jasper counties. If you'd like to speak, be sure to fill out a form to "testify," and here's the meeting's overview and FAQ.

I should point out that this hearing is for the South Carolina Senate districts, expect dates soon for House and county level redistricting hearings.

Yeah, it's a snooze fest, but this really does shape how much power you neighborhood, county, and like-minded citizens have.

First reporting: As it begins to look more certain that South Carolina will gain a 7th Congressional district following a population bump in the 2010 Census, pundits are saying to get ready for a statewide battle over the new U.S. House seat and the lines for S.C. Statehouse seats.

Word seems to be that this could be a fight in the Statehouse second only to our budget battle.

Statehouse Report has a nice profile of the looming battle, read it here, and watch for the Monday, March 28, public meeting at the Technical College of the Lowcountry at 6:30 p.m. to discuss redistricting in Beaufort, Colleton, Hampton, and Jasper counties.

Much has already been written on this issue, and there's been some interesting talk about better aligning a series of South Carolina "coastal districts."

Be sure to bookmark and/or checkout the S.C. Senate's redistricting website for lots more background info.