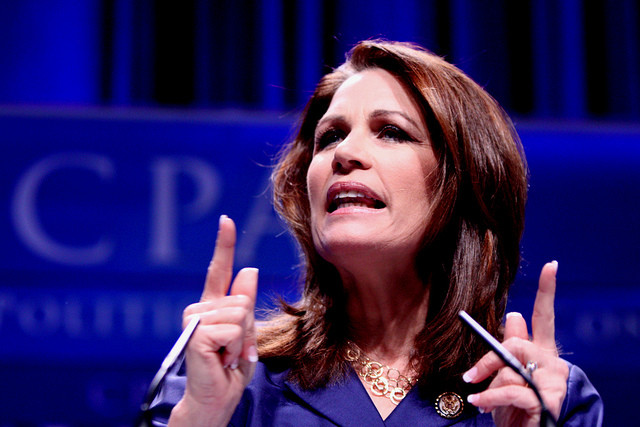 2:55 am on Tuesday April 19, 2011 | Posted by Luke Kerr-Dineen
Michele Bachmann coming to the Lowcountry, speaking in Bluffton (update: to Columbia)

Update April 19: As Bachmann prepares for a possible White House run, she went to Columbia for a rally on the Statehouse steps with Gov. Nikki Haley.

Surprisingly about as many came out for the Monday rally in Columbia as did on a rain day in Bluffton, 300. Organizers had expected closer to 2,000.

The Associated Press has a solid report you can read here on the not-too-far-off the beaten path rally.

Update April 17: About 300 came out to hear Bachmann speak in Bluffton.

The Savannah Morning News has a solid report on the fairly standard bit of politics; read it here.

Update April 16: Bachmann﻿﻿ came into town last night where she received a warm welcome at a private fundraiser.

Her public breakfast at Golden Corral aimed at Tea Party supporters is still ahead of her as is the public event at the Promenade from 3 to 5 p.m. (details below) but with rain looking more than likely today, I'll point you over to The Island Packet for an update report and details on the rain location.

First reporting: Tea Party favorite and Minnesota Congresswoman Michele Bachmann﻿ will be giving a speech in the Lowcountry this Saturday, April 16.

The non-partisan event is intended to be a celebration of americans' right to vote, and will be held at the promenade on S.C. 46 and Calhoun Street in Bluffton, according to The Island Packet, and will run from 3-5 p.m.

(Follow this link to give their article a read.)

The event was originally slated to be held outside the Old Town Dispensary in Bluffton, although concerns regarding both the weather and the hosting of the projected large turn-out have lead officials to alter the venue. In any case, here's a clip from The State newspaper before the change was announced.

Bachmann has been heavily linked in recent weeks with a possible 2012 bid for the Presidency, leading some to believe that is her motive for coming down to South Carolina. For some backstory on that, check out this article from ABC news, or this more recent one from the Huffington Post.