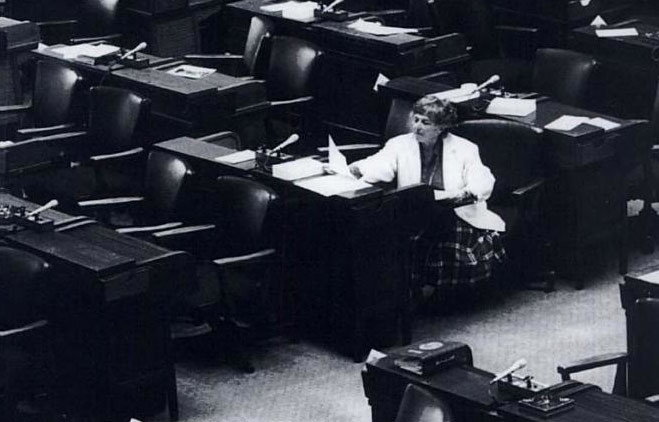 5:52 am on Sunday March 13, 2011
Beaufort mourns the passing of Harriet Keyserling (updated: ceremony to air)

Harriet on the cover of "Against The Tide: One Woman's Political Struggle"

The public tribute to the late community leader was held Saturday at USCB before a large audience. It was introduced by Keyserling’s son, Billy, the Mayor of Beaufort and hosted by Bud Ferillo, a former Deputy Lieutenant Governor, S.C. arts commissioner and recipient of the Order of the Palmetto, which is earned for public service to the people of South Carolina.

For more on the county channel, including where to find it with your cable provider or watch online, check out the county website here.

Update March 5, report from the ceremony:

The Island Packet was at Saturday's celebration and has a nice report; read it here.

Update March 2, public ceremony announced: A public ceremony celebrating the life of Harriet Keyserling will be held this Saturday at the USCB Performing Arts Center, according to The Island Packet.

You may remember that when she passed in December, Keyserling's funeral was private. According to a brief write up in the Packet, Saturday's ceremony will begin at 5 p.m. and feature several speakers. Read the write up here.

Update December 15: Beaufort Mayor Billy Keyserling this morning sent out an email thanking the community for its support with the passing of his mother, Harriet Keyserling.

The mayor also included a copy of the eulogy that was presented by Bud Ferillo on Monday.

The full email from the mayor has been copied below here:

Our sincere thanks to the many who were able to come out on a cold day to say goodbye to Harriet whose spirit, idealism and commitment to doing the right thing will live on through the many she touched.

While the day was cold, we were surrounded and comforted by many warm hearts.

For those who were not able to attend, we wanted to share the following.

Best Wishes for a Safe and Happy Holiday Season!

"Down, down, down into the
darkness of the grave
gently they go, the beautiful,
the tender, the kind;
Quietly they go, the intelligent,
the witty, the brave.
I know. But I do not approve.
And I am not resigned."

She was ours, and we loved her more than any telling of it.

Harriet Keyserling was supposed to live forever, as irrational as it is. None of us ever considered a time when she would not be here: proding, pushing, encouraging, caring, organizing, giving, working, frowning, laughing, then back to frowning.  A "force of nature" does not even begin to tell the tale.

Yes, she was shy, private, insecure and modest but she never permitted these traits to keep her from embracing uphill battles, facing impossible odds, taking on long term struggles, all the hard things that others avoided or just dropped out of sheer frustration.  AGAINST THE TIDE, indeed. Every day, every week, every year.

She detested stupid people, prejudice of any kind, violence wherever it occurred and cruelty in any form.

In one of the most unlikely moments of our long friendship,we attended a rodeo in an enormous cattle arena in Denver,Colorado, replete with every kind of calf, cattle and steer roping imaginable. It was the the opening hospitality event at a national conference of state legislators.  We had seats on the front row, a Jewish woman from New York's West Side and a city boy from Charleston trapped in a temple of genuine Western Americana; we escaped in five minutes.

What else could have powered her to go so far in public life so completely ill-equipped with the traditional skills of politicians? What else could have enabled her to achieve what she achieved in 18 years in local and state government?  What, but courage, could have moved an 88 year old woman to risk her life for the relief of pain so that she might fight on a little longer for her hearts true causes: public education, conservation, the arts, nuclear waste and women's issues?

In the recent election, Harriet sent emails to organize 100 women to join her in a statement called Agenda Over Gender. She worked at it day and night and inspired not 100, 200 or 500 women but over 1,000 women in this state to join her.

When the election was over, and that cause lost, she wrote these words to the army she had raised:"Remember that the journey is as important as thedestination. By staying involved we can model the kind of leadership we want to see. Each time we come together we will be that much stronger."

There you have it, the essence of this good, strong, decent,smart, cultured woman, teaching the highest ideals of this nation among her last messages on earth.

"Remember that the journey is an important as the destination."

Emily Dickinson wrote "the poet lights the light and fades away. But the light goes on and on."

And so, as she takes her place for eternity beside the man she loved so much who enticed her from the streets of New York to this magical, graceful place amidst Spanish moss and tidelandcreeks, let me give each of you this final charge from her:

Reported December 11: [Editor's note: We decided to update this report as The Island Packet has a nice report on Monday's funeral service and remarks, a link is at the bottom of this story.]

There was no slowing Harriet Keyserling. Even right up to the end when she actively campaigned for S.C. Gov. candidate Vincent Sheheen with her "Women for Sheheen" initiative, Keyserling was there to answer the call when she felt South Carolina was in need.

Though she wasn't a Beaufort native, she may as well have been as she fought for it at every turn.

It would be impossible for us to relay all of Mrs. Keyserling's life, if you want that  please read her book Against The Tide: One Woman's Political Struggle

How did she get to Beaufort? The Harriet Keyserling papers on file with the University of South Carolina Library detail some of that, "Born in New York City in 1922 to Isador and Pauline Hirschfield, both immigrants from Eastern Europe, Harriet Keyserling attended public schools and graduated with honors with a degree in economics from Barnard College in 1943. In 1944 she married Dr. Herbert Keyserling, a native of Beaufort, and relocated to his hometown. There Mrs. Keyserling became involved in local affairs and served on numerous civic and cultural boards while her four children were growing up."

What came next was years of service.

In 1974 she became the first woman elected to Beaufort County Council.

She then served in the S.C. House of Representatives from 1977 through 1993, and she was a founder of the S.C. Women's Legislative Caucus.

Over the years Mrs. Keyserling's life was one of service and passion. It's tough to sum all of that up in one web posting, so it may be best to allow Mrs. Keyserling to speak for herself.

Here is a section from the rewritten preface from the 2004 update of her book that I believe sums her up well, "Usually one or two people will come up to me after I speak and tell that I was inspirational and my personal struggles 'motivated' them to do more politically. Their comments make me a little uncomfortable. I never liked "inspirational" or "motivational" speakers and always thought I wouldn't cross the street to hear one. However, to write a book with a message urging people to 'Do Something' is an attempt to motivate or inspire, and the person who writes it can be labeled a motivator. I sheepishly admit now that to be 'inspirational' is okay, at least when it's my cause."

Thank you, Harriet. You motivated and inspired many of us.

Beaufort Mayor Billy Keyserling is the son of Mrs. Keyserling.

The family will have a service on Monday at 3:30 p.m. at the Beth Israel Cemetery on Bladen Street. A reception will be held at the Firehouse at 706 Craven Street following the ceremony.

Update, December 12: The Island Packet has produced their own pair of obituaries. The first is a rather straightforward account of her life and impact and the second is a more personal in tone and written by David Lauderdale.

Update, December 14: The Island Packet has a nice report on Monday's funeral service and remarks; read it here.