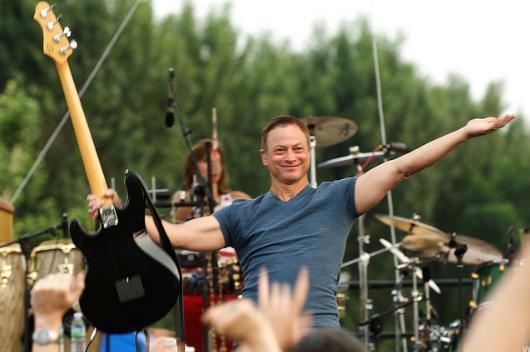 Unlike last year, there will be a charge to see the band play Sept. 16 in the park. Tickets are $25 each.

The money of course goes to a wonderful cause, though.

According to the Facebook post, military discounted tickets will be available at NFCU on Parris Island. Other distributors will be Cravings by the Bay at 928 Bay St, Ameris Bank at 2348 Boundary St, and Piace Pizza in Habersham. More locations will be announced.

Updated March 7: It looks like the Lt. Dan Weekend efforts needs to raise at least $75,000 to make its second trip to Beaufort a reality.

The Island Packet has a report on the shortfall and what's planned for the second installment of Lt. Dan Weekend. You can read that here.

Reported February 4: Well it's official, Gary Sinise will be back in Beaufort to perform on Sept. 16 as  part of Lt. Dan Weekend 2.

Here's what's been posted on the Lt. Dan Facebook page:

"The LTDB does more than 40 concerts across the globe every year, and I am thrilled to be able to return to Beaufort to perform on September 16th, 2011. The reception that the Band received last year was overwhelming and the compassion and dignity with which the community treated our injured veterans truly left such a favorable impression. I look forward to concert and parade this year."

You'll recall that the Lt. Dan Weekend is an effort to raise money for the Independence Fund, which helps our country's wounded warriors.

According to a piece in The Island Packet earlier this month, Lt. Dan Weekend 1 raised about $30,000 and paid all of the expenses for the wounded warriors who were able to attend.