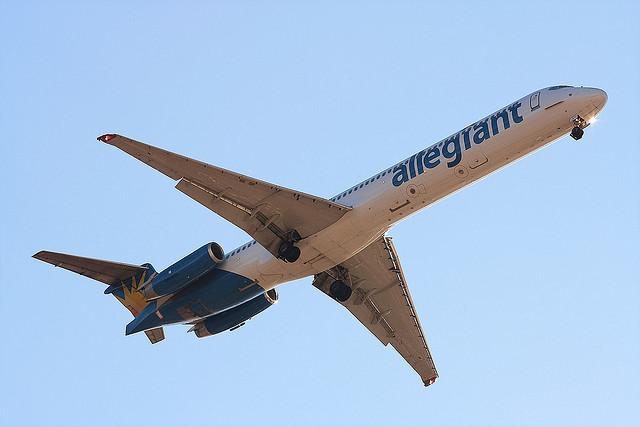 7:42 am on Tuesday September 14, 2010 | Posted by Ken Hawkins
Allegiant air coming to Savannah airport, but only flying to Florida

Flickr user silenus81
Allegiant coming in for a landing.

This is good news for us in Beaufort, but I must admit that my hopes are a little bit dashed.

When I heard﻿ that a low-cost airline arrived at the Savannah-Hilton Head International Airport I was thrilled, I thought we wouldn't have to wait and make the drive once Southwest came to Charleston.

Alas while Allegiant is starting service in Savannah on November 18, it only will be to Ft. Lauderdale. Still with an introductory fare of $30 and regular fares of $40 it will be perfect for winter getaways.

The full press release is below for your pleasure.

"We're pleased to bring an affordable and convenient travel option to Savannah," Andrew C. Levy, Allegiant Travel Company President, said. "We are confident the residents of greaterSavannah and the Hilton Head Island areas will appreciate the value of flying nonstop to Fort Lauderdale and the great deals we offer on hotels and car rentals.  We look forward to a very successful partnership with theSavannah/Hilton Head International Airport and community officials."

"We are excited to add Allegiant as our newest airline partner," Patrick Graham, Executive Director of the Savannah/Hilton Head International Airport, said. "Passengers from Savannah, Hilton Head Island and the surrounding Low Country will now have nonstop access to Fort Lauderdale's many attractions as well as its maritime businesses. Our customers will once again benefit from low-cost airfares as well as Allegiant's affordable travel packages."

Fort Lauderdale offers the ultimate escape to sunny South Florida, with miles of blue waterways, soft golden sand and gentle ocean breezes.  Located in the center of South Florida's Gold Coast, 40 miles from Palm Beach and 25 miles from Miami, Fort Lauderdale stretches from Deerfield Beach and Pompano Beach in the north of Hollywood and Hallandale Beach in the south.  The area offers 300 miles of navigable inland waterways and 44,000 resident yachts, making it recognized as the "Yachting Capital of the World" and the "Venice of America."  From the Blue Wave beaches, to the yacht-filled waterways, to the exotic Everglades, every visit is a fresh taste of Paradise.

Allegiant is more than an airline, it is a full-service travel company that offers great value to its customers through its hotel and car rental packages. The company partners with more than 40 of South Florida's most exciting hotel properties, including:  Hyatt Key West Resort & Spa, Hollywood Beach Marriott, Seminole Hard Rock Hotel & Casino and Hyatt Place Miami Airport. Allegiant provides low-cost car rental service through its partnership with Alamo Rent a Car.

Allegiant's $29.99* one-way introductory fare is limited, must be purchased by Oct. 5, 2010, and is valid for travel through March 8, 2011. Introductory fares are not available on all flights. After the introductory fare period, regular one-way fares on the route start as low as $39.99 one-way.  Reservations can be made on the company's website at www.allegiant.com or by calling the company's travel experts at 702-505-8888.

* Seats are limited. Fares are one-way and not available on all flights. Must be purchased by Oct. 5, 2010 for travel throughMarch 8, 2011. Offer not available: Nov. 20-30, 2010, Dec. 18-31, 2010 and Jan. 1-3, 2011.  Prices do not include PFC, segment tax or Sept. 11 security fee of up to $10.70 per segment. A segment is one take-off and one landing. A convenience fee of$14.99 per passenger will apply when booked on allegiant.com. A convenience fee of $14.99 per passenger, plus $14.99 per segment, will apply when purchased through Allegiant Air call centers. Purchases made at any Allegiant Air Airport Ticket Office will not incur a convenience or call-center fee. For ticket counter hours of operation, please visit www.allegiant.com. When purchased at the time of booking, a checked bag fee of $14.99-$29.99 per bag will apply per person, per segment. If purchased at flight check-in, a fee of $35 per checked bag, per person, per segment will apply for the first two bags checked. Additional higher fees will apply for three or more checked bags. Fare rules, routes and schedules are subject to change without notice. Restrictions apply.