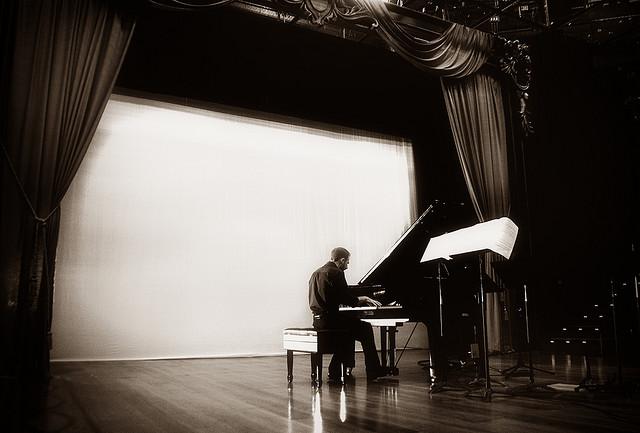 6:54 am on Tuesday December 7, 2010 | Posted by Ken Hawkins
Charles Wadsworth to perform at USCB Festival Series

The next installment of the University of South Carolina Beaufort Festival Series is set for Sunday when Charles Wadsworth returns for a visit to Beaufort.

Wadsworth is the former Artistic Director for Chamber Music for the Spoleto festivals first in Italy and then in Charleston and will perform on the piano to be joined by Jeewon Park playing piano, Yosuke Kawasaki playing violin, and Edward Arron playing cello and hosting.

Performed will be 14 Variations for Piano Trio, Opus 44, Beethoven; Fantasie in f minor for Piano, Four Hands, D. 940, Schubert; Rhapsody No. 1 for Violin and Piano, Bartók; An die musik for Cello and Piano, D. 547, Schubert; and Piano Trio in g minor, Opus 15, Smetana.

The event is scheduled for Sunday, December 12, 2010, at 5 p.m. at the University of South Carolina Beaufort Performing Arts Center.

Profiles of each musician are below.

Charles Wadsworth, a celebrated, living legend in the world of music, was the founding Artistic Director of the Chamber Music Society of Lincoln Center and led it for twenty years - from 1969 to 1989, creating a concept of programming for varied instruments and voice that brought chamber music to the popularity it has today and led to the profusion of chamber music festivals throughout the U.S. and worldwide. His inclusion of major soloists with a nucleus of permanent artists inspired a new generation of virtuoso musicians to perform chamber music. Wadsworth also instituted a commissioning program, which produced important and frequently performed works from a wide range of composers including Barber, Bernstein, Menotti, Bolcom, Boulez and Corigliano.

For fifty years, Charles Wadsworth was a favorite at the Spoleto Festivals, first in Italy and then in Charleston, SC, as Artistic Director for Chamber Music, where he both performed as pianist and was the much-loved host of the daily concerts at the Dock Street Theater. He also was the artistic director of annual concert series presented in Old Lyme, CT, Beaufort, Columbia and Camden SC, and in Savannah, Georgia. For twelve years, he toured as partner in concerts with Beverly Sills. In 2007, he founded the acclaimed Festival Internacional de Musica in Cartagena, Colombia.

Deciding to relinquish these responsibilities at the age of 80, Wadsworth continues to perform chamber music as Guest Artist, in concerts with his Charles Wadsworth and Friends group, in programs with individual artists and in lectures-with-performance nationally.

Wadsworth has performed at the White House for four Presidents: Kennedy, Nixon, Carter and Reagan, and has been honored by France as a Chevalier in the Order of Arts and Letters and by Italy as a Cavaliere Ufficiale in the Order of Merit. He has been awarded New York's Handel Medallion, South Carolina's Order of the Palmetto and the Elizabeth O'Neill Verner Award, and honorary doctorates from the University of South Carolina, Converse College and Connecticut College. His hometown, Newnan, Georgia, restored and named the municipal auditorium for him. He is married to Susan Wadsworth, the founder of Young Concert Artists, Inc.

The 2009-2010 season takes Ms. Park to major concert halls across the U. S. and Korea, where she will make her debut performances at the Metropolitan Museum’s Grace Rainey Roger Auditorium, Tilles Center for the Performing Arts, Vilar Performing Arts Center, and recitals at Barge Music in New York City, and Kumho Art Hall in Seoul, among others. In addition, she returns to the Lake Champlain Chamber Music Festival for two winter concerts, Caramoor International Music Festival as a member of Caramoor Virtuosi where she was named a Rising Star in 2007, and the Bridgehampton Chamber Music Festival where she will collaborate with such distinguished artists as Ani Kavafian, Peter Wiley, Cynthia Phelps and Carter Brey.

Recent and current highlights include several performances of Mozart Piano Concertos K. 414 and K. 415, a recital of Messiaen Preludes and Kurtag Jatekok, a solo recital and Mendelssohn 200th birthday celebration concert at Caramoor, and U.S. tours with the “Charles Wadsworth and Friends” series. As a soloist, she has appeared with the Charleston Symphony, the Mexico City Philharmonic, the Monterrey Symphony, the Mexico State Symphony, and the KBS Symphony Orchestra. Following her performance of the Mozart Concerto K. 453 with the Charleston Symphony, the Post and Courier acclaimed that “Park demonstrated rare skill and sensitivity, playing with a feline grace and glittering dexterity.... lyrical phrasing and pearly tone quality.”

Ms. Park has been heard in numerous live broadcasts on National Public Radio and New York’s Classical Radio Station, WQXR. Additionally, her performances have been nationally broadcast throughout Korea on KBS television. She came to the U. S. in 2002, after having won all the major competitions in Korea, most notably Joong-Ang and KBS competitions. Ms. Park is a graduate of The Juilliard School and Yale University, where she was awarded the Dean Horatio Parker Prize. Her teachers include Young-Ho Kim, Herbert Stessin, Claude Frank and Gilbert Kalish.

Kawasaki was also Concertmaster of the Montgomery Symphony Orchestra from 1999 to 2001. He has been guest soloist with Aspen Chamber Symphony, Greenwich Village Orchestra, Kyushu Philharmonic, Orquesta Filarmonica de Lima, Singapore National Youth Orchestra and the Tokyo Metropolitan Symphony Orchestra, as well as with the four orchestras of which he is Concertmaster. He is a founding member of the D’Amici String Quartet along with world renowned musicians Federico Agostini, James Creitz and Sadao Harada giving critically acclaimed performances and masterclasses in Europe and Japan. Mr. Kawasaki is also a founding member of Trio+, a piano trio with pianist Vadim Serebryany and cellist Wolfram Koessel.

His most recent recordings include chamber works by Beethoven, Mozart and Schumann on the TDK Core Label. He has also recorded Bach’s Double Concerto and the Complete Brandenburg Concertos with Walter van Hauwe and the Saito Kinen Chamber Players, both on the King Label.

Mr. Kawasaki began his violin studies at the age of six with his father Masao Kawasaki and continued with Setsu Goto. At the age of ten he was accepted into The Juilliard School Pre-College Division where he won the school-wide concerto competition. He then continued his education and graduated from The Juilliard School in 1998 under the tutorship of Dorothy DeLay, Hyo Kang, Felix Galimir and Joel Smirnoff.